Deck3 is a workspace and collective platform connecting creative disciplines in the field of dance and the performing arts. It is a collaborative and shared space with likeminded (or not) productive people cultivating the idea of exchange, new ways, try-out and cross-disciplinary collaboration. 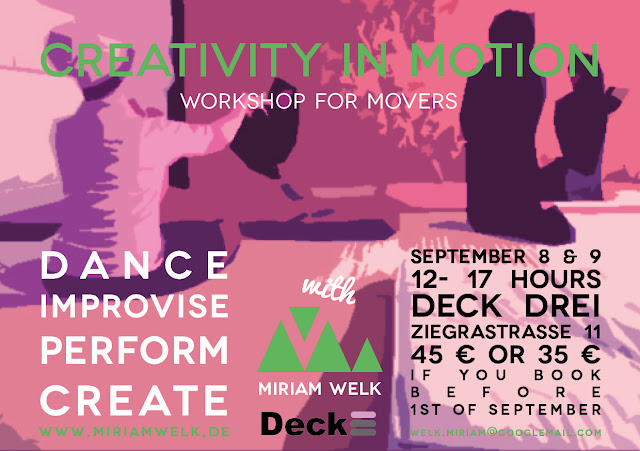 CREATIVITY IN MOTION
workshop for movers


In this workshop we will learn some basic movement principles in combinations and improvisation excersises. through collaboration and exchanging we will also create small choroegraphies in groups - diving deep into levels of movement as a language.

Miriam Welk, born on December 13, 1983 in Germany. She is collaborating as a dancer, choreographer and dancefilm maker with numerous artists in projects like treasure factory Her artistic interest lies in the experimental and interdisciplinary research combined with sociological and philosophical discurses in. Miriam Welk is the initiator of the artist collective wilde pferde.
Her productions were shown at Festspielhaus Hellerau, FriedrichstatZentral e.V., Projekttheater (Dresden), Sophiensæle, Mica Moca Project (Berlin), at Tanzwoche Dresden 2009, OpenDans Festival 2010 and 2011 (Rotterdam). She also worked as a teacher in several projects in Germany, The Netherlands, Spain, Israel, The Palestinian Autonomous Territories.
She is experienced in teaching contemporary, improvisation and children dance classes. She is also teaching workshops where tools for choreography and collective work are procured.
Here are some institutions and projects, where she worked in the past are:
Nederlands Dans Theater
Black Box White Cube
Kinder- und Jugendzirkus
CABUWAZI
Jeugdtheaterschool Leiden
CIRCOLIBRE
SKVR